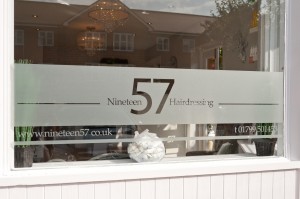 Salon owner and creative director Lisa Chapman comes from a long line of capable, creative hairdressers. The salon at 1 Station Street was originally opened by her grandfather in 1957, and years later Lisa watched her grandparents work there, and developed her own passion for hair. The salon has been in the family ever since, but underwent a complete refurbishment in 2014, when it was renamed in honour of its special history- and Nineteen57 was created!

If you don’t find it above

For an appointment or to find out more